The high valley of Tafraout – in the Jbel Bani Mountains – is about 2 hours’ drive from Zagora. Electricity has only been available since mid-March 2016. Depending on where you live in Tafraout, there is more or less water, because the valley is crossed by an underground water vein similar to a river. Thus, the wells are also of different depths, such as about 140 m at the new nomad school. When needed, the inhabitants either pump water into an open container located a few hundred metres from the house or tubes end nearyby their houses. Women and children carry many canisters of water into their houses every day. There are hardly any toilets or showers.  For cooking, apart from gas, they use wood collected on the daily walk of the shepherds. The proceeds from watermelon sales were obviously not put into improving the housing situation. The nomads in the mountains take water, if available, from water holes or walk with a donkey to a well further away. There they also wash their clothes.

The inhabitants of Tafraout built two roads through the valley in stages over the past few years, and the state supported them with equipment.

Since around 2015, agriculture has developed rapidly in the Tafraout Valley. The state provided support to farmers in the form of water storage tanks (approx. 20x10x5m) and pump houses. While around 2012/2013 only a few semi-nomads grew watermelons in their gardens, by 2022 the melon fields had spread throughout the entire high valley and up to the mountain slopes. People now only focused on growing watermelons, which were the first in the country to ripen in this area of Morocco. Former nomads bought land and also planted mainly watermelons. In the first years, the melons brought a good and fast income, but in the meantime negative effects are visible. Due to the oversupply of watermelons and consequently lower revenues, some farmers have already fallen into debt. Since 2019, there has hardly been any rain and so the government limited the area for watermelons to 1 ha per family for the coming growing seasons. It is also forbidden to sell or lease land to outside investors. In 2022, some cereal fields, vegetable cultivation and henna fields were already visible.

A first alternative to melon cultivation is offered by the medicinal plants project, which is supported by the Hand in Hand Fund of the “Deutsche Umwelthilfe e.V.” https://www.duh.de/zielgruppen/internationales/hand-in-hand-fonds/hand-in-hand-fonds-foerderprojekte/.v

The nomadic families of Tafraout are supported since years with great commitment  by:

This project aims to encourage rural women from the Tafraout/Jebel Bani area to cultivate medicinal herbs and teas in order to prevent the knowledge of medicinal plants from being forgotten. The first step of the project consists of finding, recording and photographing medicinal plants in Jebel Bani and the dune area. The older nomadic women, who have only transmitted their knowledge orally so far, will be interviewed and subsequently searched for the appropriate plants, photographed and the findings recorded in writing.

In the second phase of the project it is planned to cultivate suitable medicinal herbs on fields in the high valley of Tafraout, which will be bought or leased. The fields are to be cultivated by women. Marketing and sales will also be in the hands of the women, who will be able to earn their own income with this project. The aim is to establish a women’s cooperative.

This project is intended to offer alternatives to the watermelon cultivation boom. Negative effects are already being felt.

Update to above project by September 2020

Hafid Benyachou states: our association “Association Akabar for Sustainable Development and Culture – الثقافة و للتنمية أكابار جمعية جمعية” together with Hand in Hand – Fund started a herbal project for women in Tafraout/Sahara area. The idea is to look for those herbal plants that our parents used and still use in their todays’s life to keep fit and healthy. The project shows the young generation of both nomadic schools of Tafraout/Sahara the importance of those herbal plants in our life. And in the same time to think about planting them in ideal farm for herbals especially for women and thereby create some income for local women who do not have chances to create an own income. The project provided also some computers for the students who come in touch with the world of computers for the first time.

Private donations by our trekking guests:

Our Swiss partner has again provided a larger sum for the medical care of the nomadic families of the Jebel Bani area and promised further donations. In future, doctors will visit nomads of this area several times a year. Hafid Benyachou and the Association of Nomads “Association Akabar for Sustainable Development and Culture – الثقافة و للتنمية أكابار جمعية”  are planning to take appropriate measures together with the local health authority of Zagora. 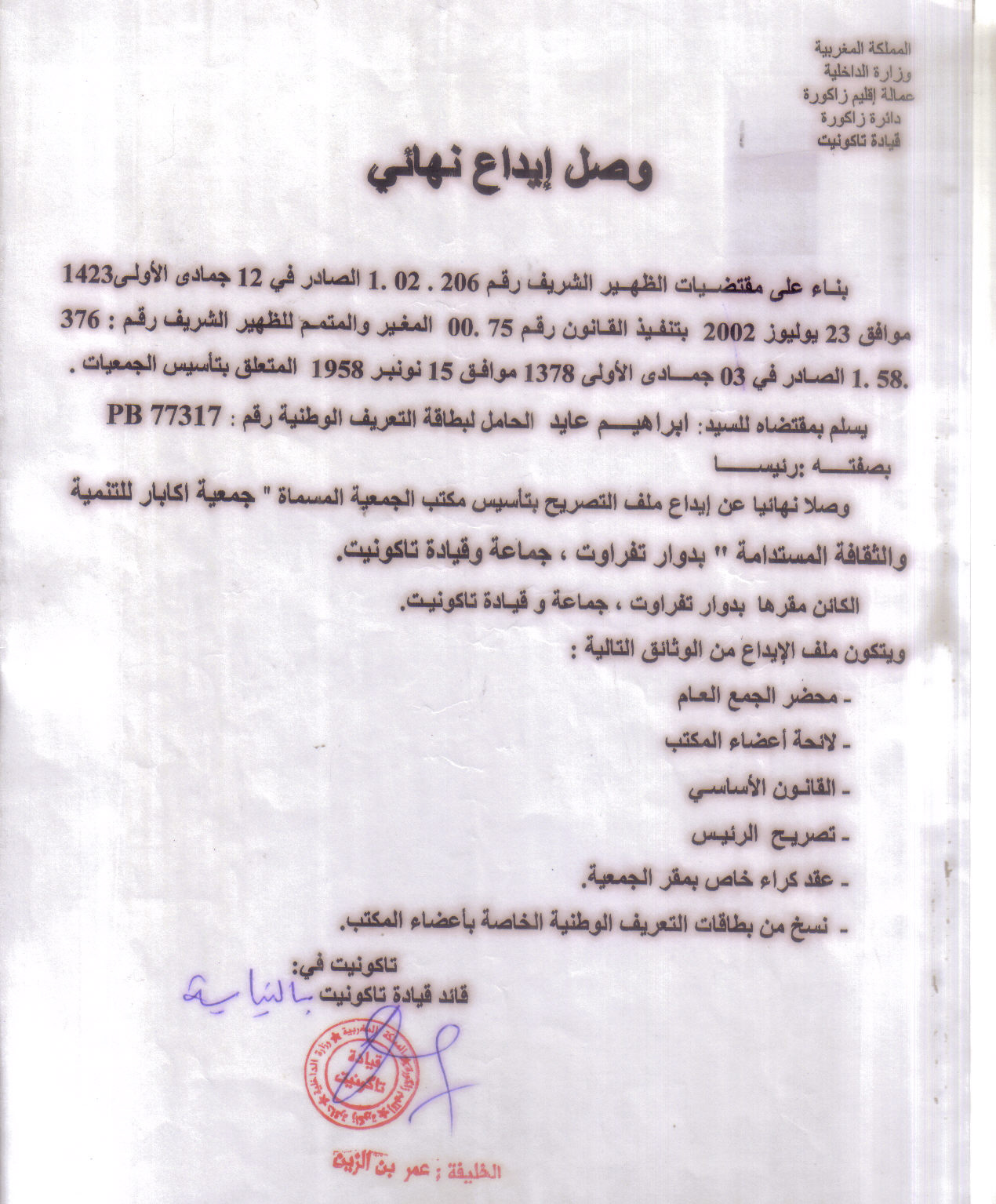 In 2013, construction of a water elevated container from donations at the old Nomad School. The water pipe was laid several hundred metres under a field to the school grounds. In addition, the two toilets received running water and a large kitchen was added. A few years later, the school got its own well.

The “Engineers without Borders” got involved in the Tafraout Valley several times. In 2015 and 2016, for example, the wells and water quality were examined, pipes were laid and a high container was built at the new nomad school.